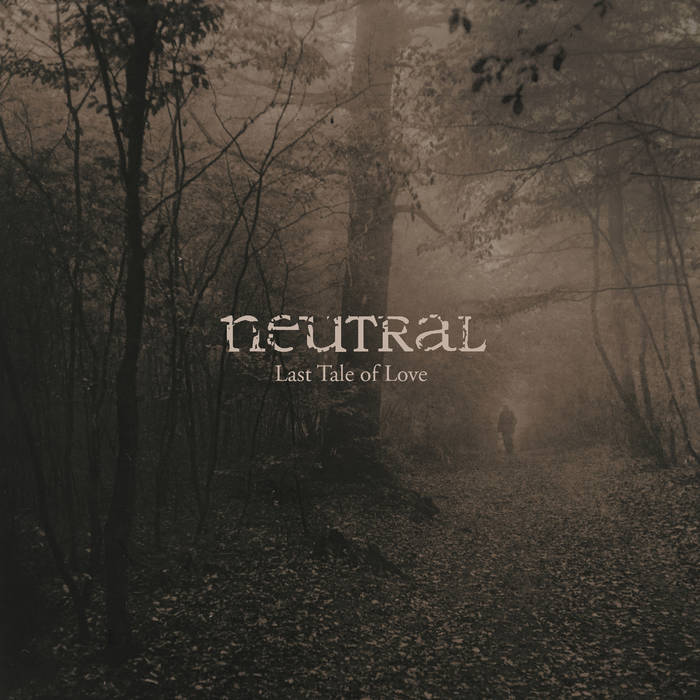 Infinite fog Production presents Neutral's (last?)come back. Just a year after the grandiose "The World of Disbelief", Ash has finished the recording of "Last Tale of Love", the album that most probably will stay the last album of the project. After 1,5 years of delays and waiting we are honored to present this beautiful record in physical form.

"Last Tale of Love" it's the same inimitable Neutral as always - dark and beautiful songs with unforgettable melodies, bitter-sweet poetry, and heady soft deep voice. This time a beautiful decoration on the album is the voice of guest artist Alena Ka Boo.

Notable that the last album includes 2 early songs of the project "...To The Endless Play" and "Last Tale Of Love". Songs that are well-known by fans through live shows and CDs live recordings in Königsberg but first time as studio versions.

The album “The World of Disbelief”, released a year earlier, had very illusory chances of hearing the phrase “new" Neutral in relation to another record in any foreseeable future. Neutral is not a stamping project, and Ash lately, has gone headlong into the creation of epic black metal in the Sickle of Dust project, which has found a well-deserved response, sowing reasonable dangers for the future prospects of Neutral. The spirit of the final composition of the previous album, "When the story is over," was also alarming for fans, allowing for farewell interpretations. But still, a miracle happened.

The very first chords of the delightful "Between Tomorrow and Today" immerse the listener in the unique ethers of melancholy, romanticism, and retrospective triumph, flashes of memories of past triumphs amid the inevitability of existential defeats. Not closed on self-repetition, the melody of Neutral is flawlessly recognizable among any other neofolk, and if we provide that Ash for some reason decided to remain incognito, making an instrumental album, or his parts as an outside vocalist, there would still be no doubt about the authorship of the album. But, of course, enchantment, the signature vocals, which are more and more ripening with velvety nobility, are the component without which the Neutral would not be itself.

The autumn of being, a detached contemplation of the fervor of young passions, alien or irrevocably gone, the aesthetics of the inevitable end - and at the same time, recognition of the triumph of the bold path of a fallen angel in spite of inactive heavens. The interweaving of these motifs forms the basis of the traditionally rich, exquisitely complex lyrics of the compositions, contrary to the general mood, which does not pass despondency, only once approaching their boundaries ("Stone Like Water"). In addition to drawing on Lovecraft's poetic heritage (Festival), the album is adorned with two songs by Alena Ka Boo in new arrangements, whose soulful voice not only has a special charm but also balances the vital facet - even in the celebration of the funeral feast (Schöne Leich). Performed together with Ash, the noir and touching at the same time composition "Dust of the Stars" is undoubtedly one of the record's most valuable treasures.

As well as in the last album, it was not done without rethinking old songs. On «The World of Disbelief» was the successful interpretation of "Playroom", just as appropriate here came «…to the Endless Play» much more detailed and deep than in the old version.

Rich and by no means quantitative - the Neutral's legacy, meanwhile, plays a twofold, specifically insidious role in evaluating new work. The transcendental Everest, piercing the cosmic or the upper veils, the album «Serpents in the Dawn» ( Eis Und Licht 2008) remains in the eyes of longtime fans an inevitable golden standard, deliberately casting a shadow on each subsequent release, demanding proof of the justification of its appearance; it is characteristic that the releases remain sincerely long-awaited. And no, “The Last Tale of Love” is again not “better” than the classic album, which is objectively not surprising as not possible.

We can say with confidence that even a pass-through release - tortured, noisy, glued together from concert/rehearsal material, etc. - created under the auspices of the project, which is key for the scene, would arouse reflex interest and acquire a status-favorable, purely formal regalia. But this is not the case for "The Last Tale of Love". Aged in the corporate style Neutral and original already in its enduring "directness", the album captures and transports the listener to the borderline supersensible space where life and death meet, and fragments of worldly tragedies shine with poetic reflections of the thin edges of the world. The journey, in which we have already been, traversed by new picturesque thorns and leaving, through the prism of experience, unexplored, previously uncontrollable experiences.

The title track, ecstatic with its energy, inherits the intrigue: is the album conceived to draw a line under the story of Neutral? Discussing the scale of the hypothetical loss is pointless. It would be more correct to note that among other veterans of European scenes, neutral is one of the very few who still manages (and doesn't matter how regularly) to create a romantic neofolk that is not distorted by post-industrial experiments, the quality of which, without conditions, without concessions for good name and past merits, is not inferior to the releases of the golden age and the genre as a whole. "The Last Fairy Tale of Love" is a brilliant confirmation of this." - Vladislav Yarov